More than 1,000 homes and 4,000 people are recycling in Collipulli, Laja, Los Ángeles, Mulchén and Nacimiento

After eight months of work and coordination with various actors in Collipulli, Laja, Los Ángeles, Mulchén and Nacimiento the results are starting to show. By the end of April the Reciclaje Casa a Casa (House-to-House Recycling) initiative of the Trash-free Neighborhoods program already had 1,000 homes signed up, so more than 4,000 people are now recycling at home.

The registrations per municipality have arisen to 108 homes in Collipulli, 237 in Laja, 77 in Los Ángeles, 251 in Mulchén and 336 in Nacimiento. All of this together has added up to revaluing 8.9 tons of waste (collection details are in the image).

“We are very pleased with the results so far, especially considering that we launched this initiative eight months ago during the pandemic. We are certain that the residents of the five neighborhoods want to participate and carry out activities that support the common good, which is sustainable waste management and environmental protection,” said Javier Peró, Kyklos General Manager. 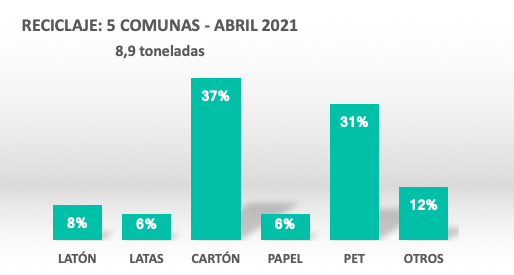 THE BACKGROUND. The House-to-House Recycling program stared in August of 2020 with a reduced pilot logistical stage (approximately 50 residences per municipality) to observe the behavior of residents in these five neighborhoods. Six communities were included, and 1.3 tons of waste were collected in two months.

CMPC Corporate Affairs Assistant Manager Felipe Alveal explained that one of the program’s challenges was to balance two of the values that are most deeply pertinent to CMPC management; people’s safety and environmental protection. “We wondered if it was the right time, but we were sure that it was possible to balance caring for people and the environment during the pandemic. The results show us that it was the right decision.”

One of the benefits of the initiative was to separate recyclables at their point of origin (houses) without having to interact with other people. This is because a Kyklos team member is in charge of designing a route to travel through the villages picking up the recyclables that the participants hang from their gates.

President of the Neighborhood Association of the La Granja de Mulchén Villa Ana Robles said, “We used to throw everything in the trash dump, which is near to overflowing. A lot needed to be done. This is a benefit for the community.” Its most important impact is on two recyclables with 31% of PET plastics and 37% of cardboard collected. This is also consistent with domestic household recycling numbers.

NEXT STEPS. Current efforts of the Trash-free Neighborhoods and the House-to-House Recycling programs include enhancing the recycling process. This means setting up collection sites in the communities, working with local stewards to begin recovering the waste as well as creating awareness in children, young people and civic leaders.

Specifically in regards to local stewards, information is being gathered on those who are interested in the world of recycling and for setting up work spaces. Incentives for the villages to participate in the House-to-House Recycling program are also being developed. Others are working directly with schoolteachers in the various neighborhoods to begin raising early awareness in children.

“Community work is about building trust with people, creating agreements and meeting them. Our promise has been to work on sustainable waste management at the regional level, which is the work that each of us does every day by connecting with the communities in the area,” said Camilo Acuña, Assistant Manager for Regional Development at Kyklos.

Chile Sin Basura (Trash-free Chile) is a community that shares the goal of incentivizing changes regarding waste management. Tripartite effort has been achieved (public, private, social organizations) on many levels with the goal of reducing, reusing, and recycling. The municipalities have been working closely together this year following a Roadmap or series of measures for making progress on the Trash-free Neighborhoods challenge.