We are dedicated to Innovation

On Thursday, August 18th, CMPC Companies through CMPC Ventures officially opened its new offices in Finland. They are located on the premises of Aalto University in Helsinki, the capital of this Nordic nation.

CMPC Chairman of the Board Luis Felipe Gazitúa, General Manager Francisco Ruiz-Tagle, Innovation and Information Manager Felipe Alcalde, Corporate Affairs and Sustainability Manager Guillermo Turner, and CMPC Ventures Manager Bernardita Araya were all present at the facility opening. This Chilean company will be represented by Anna Niityla, of Finnish nationality. 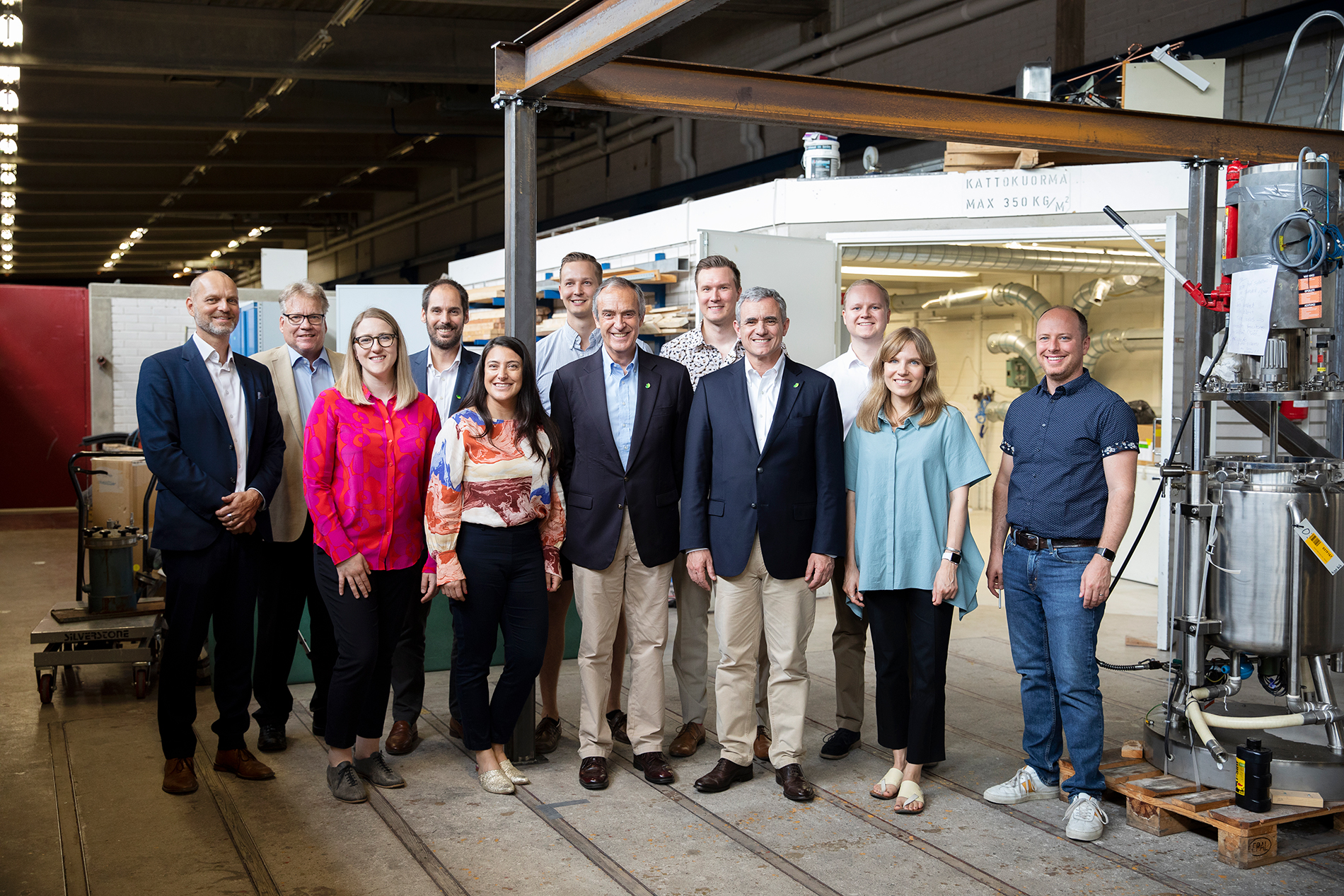 From this location CMPC will have much greater connectivity with the innovative ecosystems present in Finland and the other Nordic countries. The corporate executives’ trip also included a number of meetings in Stockholm, Sweden, with representatives of the Swedish government and the worlds of academia and research.

This past Thursday represented another step beyond the one taken in January when the partnership was made between CMPC and the Finnish Nordic Bioproducts Group for making textile fiber from cellulose. The development was scaled up from the university-owned, patented AaltoCell technology. In addition, the company has created a new textile fiber from vegetable matter called Norratex. Both technologies are at the forefront of technological development for their handling of cellulose since they do not use toxic chemical components or solvents. This makes for more sustainable and eco-friendly products, an optimal solution made from materials other than fossil fuels.

The alliance between CMPC and Nordic Bioproducts Group includes an investment of 6.5 million euros by the Chilean company in this first stage to speed up this textile fiber technology’s development. Dedicated Research and Development facilities are under construction for this purpose, which CMPC executives got to tour in witness of their level of progress. 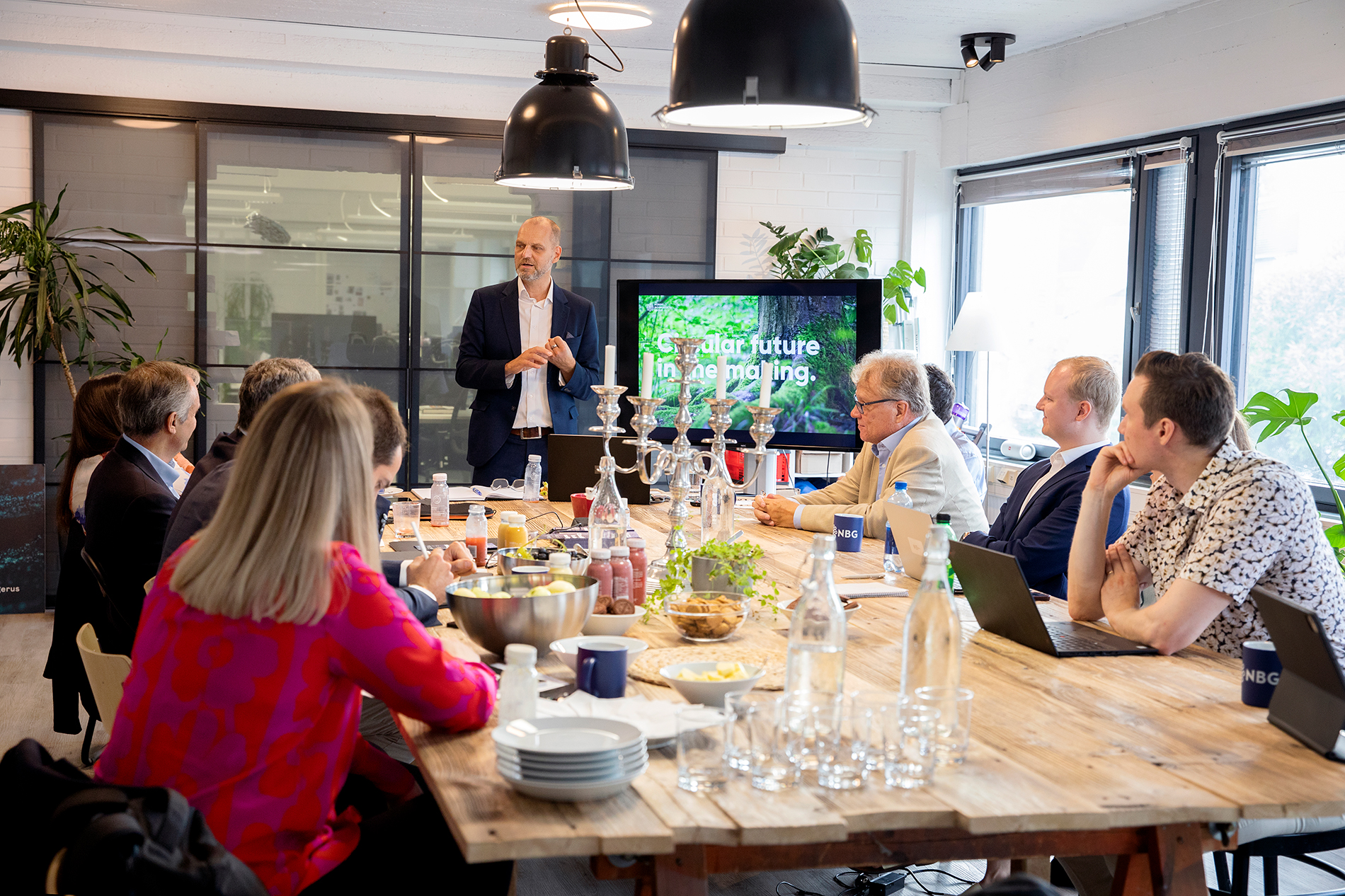 Broad itinerary in Sweden and Finland

CMPC’s tour of Northern Europe officially kicked off on Monday the 15th in Stockholm at a meeting with Regina Summer, Senior Director of Strategy and International Collaboration of Vinnova. This Finnish governmental institution is tasked with promoting innovation through collaboration among government, private companies and the academic world.

A meeting was also held with representatives of Business Sweden, the country’s vehicle to connect the public and private sectors for exploring new business ideas. Multilateral meetings were also held with members of RISE, the Swedish Innovation and Development Institute, as well as representatives of the Wallenberg Wood Science Center and KTH, Sweden’s leading technical university. Finally, the Swedish leg of tour finished up with a visit to the Kista Innovation Center located in what is known as the Swedish Silicon Valley.

The Wednesday morning agenda in Finland included meetings with top authorities of Business Finland, led by its CEO, Nina Kopola, as well as representatives of the Foreign Affairs and the Economy and Employment Ministries.

On Wednesday CMPC executives also visited the offices of Sitra, the Research, Development and Future Fund lead by Jyrki Katainen, former Prime Minister of Finland, with whom the Chilean delegation had the opportunity to share and discuss future trends.

The Thursday agenda was mainly focused on the opening of the CMPC offices, although a meeting with VTT – one of Finland’s leading research centers – was also held with a special focus on the development of new products from cellulose fibers.

Lastly, back at the premises of the University of Aalto, Gazitúa, Ruiz-Tagle and the rest of the CMPC representatives got to see first-hand the first prototypes of products made 100% based on cellulose from CMPC.

“In both Sweden and Finland we have heard just one message: advancing to these levels of development and well-being requires joint work between governments, the private sector and universities. Therein lies the secret of the success of the Nordic countries that we admire so much,” said Luis Felipe Gazitúa, Chairman of the Board of Directors of CMPC.

“Clearly, for a company like CMPC, what we have heard on this tour makes even more sense because we are talking about two heavily forested countries. To give just one example, in Sweden more than 73% of the land area is forested of which 80% is under productive management,” he added. 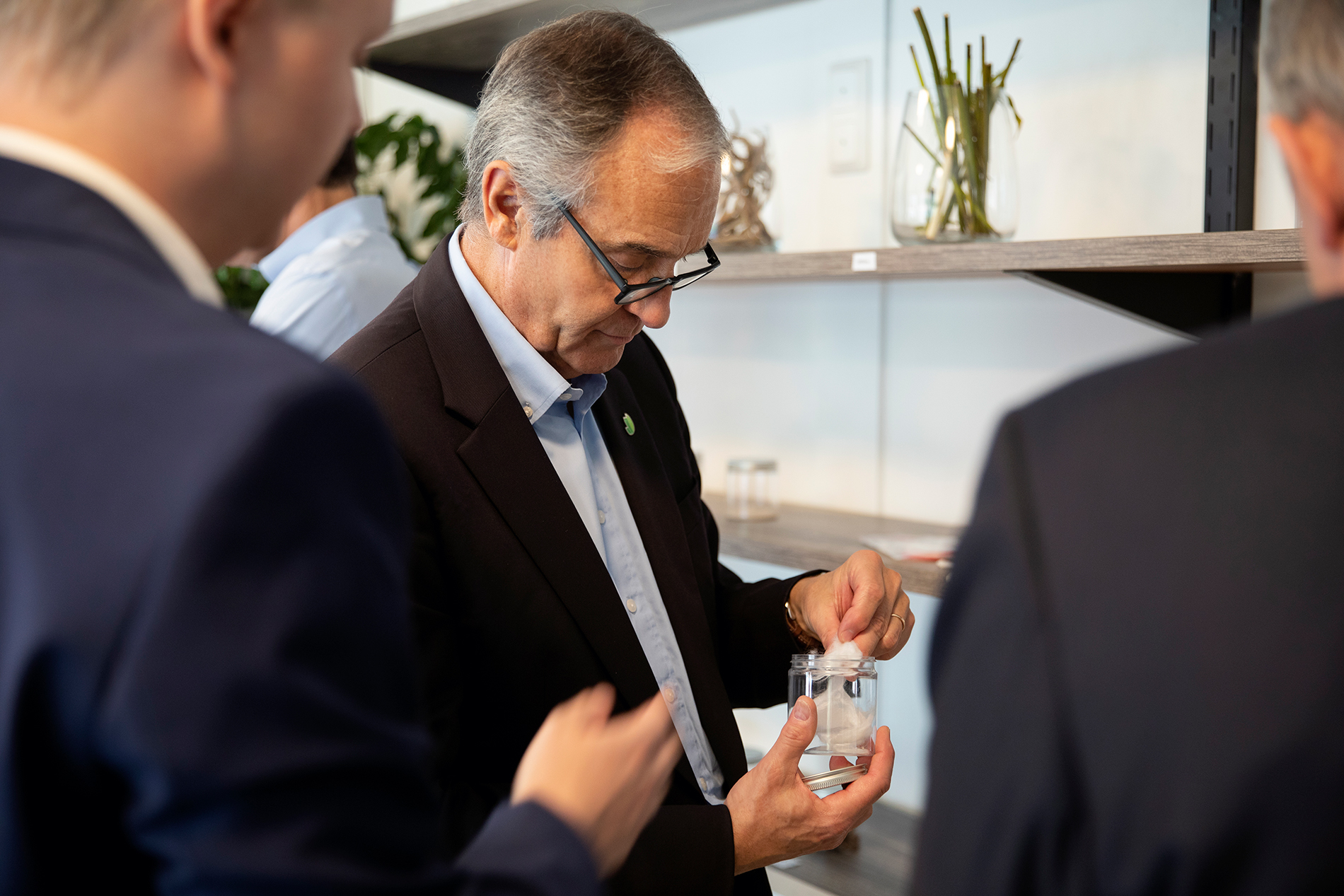 “Being able to open this office and above all deepen our alliance with Aalto University and Nordic Bioproducts Group makes us proud, but also brings challenges as we are now part of one of the most formidable and interesting innovation ecosystems in the world. This is a very large, long-term venture that will absolutely motivate us all to face challenges head on while we try not to be afraid of making mistakes.”

“A few years ago we decided to make a serious commitment to innovation. The forestry sector in general and CMPC in particular have a lot of room to grow as we move forward because our products, based on cellulose vegetable fiber, are specifically the kinds that are carefully studied here for their multiple benefits as a replacement for other types that are much more polluting and made from fossil fuels.”

In the NBG method, cellulose is first processed into small particles in an ecological and cost-effective way using the patented AaltoCell™ method. The inventor of the AaltoCell™ method, Professor Olli Dahl of Aalto University, was convinced from the outset that the method could also be used to produce plant-based textile fibers.

NBG has been exploring a new way to utilize cellulose for textile fiber production for several years, with the ideal conditions being developed last June. Now, the Norratex process can use both short and long kraft cellulose fibers, which is a significant advantage over traditional viscose, which is manufactured by dissolving pulp with costs up to 30% higher.

Olli Kähkönen, Co-Founder and Innovation Director of Nordic Bioproducts Group:
“Collaborative guidelines are critical for the success of this project. We partnered with CMPC to initiate an intensive product development period of approximately one year. If everything goes as planned, we will start producing Norratex textile fiber on a pilot scale.”

With a total investment to date of 6.5 million euros, the work plan includes the creation of a small-scale plant to begin producing samples for customers and key partners and optimizing the process for our fiber. The long-term plan envisages key milestones to increase the production capacity of Norratex, which has the potential to be one of the most sustainable textile fibers in the world.